Adjiedj Bakas - The State Of Tomorrow


Omschrijving boek
Most people don't really want the future, they want today to go on unchanging for the next fifty years. This is not going to happen. In the next fifty years humanity will experience more change than we have in the last 5,000 years. The current economic world crisis, which will come to be known as The Great Stagnation, will give rise to the greatest innovations ever. The world population is growing by 6 million per month. Worldwide, the middle classes are growing. With rising oil and other commodity prices the limits on the old ways of doing business are becoming clear. Visionary companies which want to operate in a future-proof way should consider the Megatrends which will change business dramatically. Robotics, miniaturization, virtualization and cloud computing are changing the ways in which companies operate. Adjiedj Bakas writes vividly about his inspiring vision of the future. Adjiedj Bakas (1963) is a highly acclaimed trendwatcher, author and speaker. He researches social, cultural, economic, technological and spiritual trends and interprets these for an array of clients. He lectures about 200 times per year for businesses including Apple, Credit Suisse, Philips, Air France KLM, DSM, Google, Microsoft, Shell, ING, Nike, Rabobank, ABN AMRO, PWC , KPMG, Cisco, Deloitte, E&Y, Lexus and BMW. He has written a number of books about the future which have been published to acclaim in several different languages and in countries as diverse as Brazil, The Netherlands, China and Sweden. His books have sold more than 600,000 copies worldwide. With a preface by former European Commissioner Frits Bolkestein and columns by H.M. Queen Maxima of the Netherlands, ex-Dutch prime minister Wim Kok, former Dutch Central Bank President Nout Wellink and many others. 'Adjiedj Bakas is a very inspiring speaker and out-of-the box thinker.' Mark Rutte, prime minister of The Netherlands 'This man explodes with optimism. And he can speak! He is a master of the art of conversation and has a sharp sense of humor.' Siggi Weidemann in the Süddeutsche Zeitung, Germany 'He is a true citizen of the world, with a curriculum vitae that spans three continents. Adjiedj Bakas puts his rich multicultural inheritance to great use in his professional life.' Gita Kapoor in the Times of India 'Adjiedj Bakas is an ebullient man.' Judith Bogner on Bloomberg Television 'Adjiedj Bakas is a major trendwatcher.' Andrew Moody in de China Daily 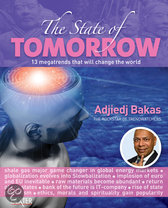 The State Of Tomorrow